Birders each have their favourite sites in the borough which together form a good cross section of habitats and potential species regardless of the time of year. As a whole they represent the diversity of the borough under public access. There are plenty of other good areas waiting to be found and unfortunately many sites that are well watched but private, with access only possible with permission of the land-owner. As all sites are bounded by private land and access is generally on public footpath, we feel obliged to ask that birders respect the birdwatching and rural codes at all times and please do not trespass.

Basingstoke and Deane is divided into five different habitat types:

Basingstoke
The central area of Basingstoke does appear to be a concrete jungle that appears unsuitable for wildlife of any form, however even here there is little oasis’ of parks and larger gardens that do provide a home to birds etc. Even a few minutes in Eastrop park or the War Memorial park will show something. However, even in this apparently unhopeful setting there are hotspots that warrant a longer visit.

River Valleys
The borough is dominated by two main river valleys - the Test from its source at Ash and the Loddon that passes to the Thames Basin to the north. Both are difficult to access due to private ownership, and the estate ponds provide habitat for many of the ducks and waterbirds.

Woodland
The borough is blessed with ancient managed woodland primarily of Oak, Ash and Hazel. However none bar Pamber Forest are particularly extensive. Many hold a rich variety of species as well as some of national importance.

The Downs
The areas to the North and South of Basingstoke are dominated by chalk downland - The North Wessex Downs. Most of this area has been converted to arable farming in the last fifty years or so and the grazed areas typical of sheep rearing have all but disappeared. The vistas to the south and the north are typical of the highest areas and although birds are scarce, this is an important part of the diversity of the borough. The area around Kingsclere was immortalised in the book ‘Watership Down’

The Heaths
The borough holds vestiges of the Thames Basin Heaths. Much of this has been planted with conifers but small patches of heath and gorse still remain. These hold small populations that are so typical of the New Forest.

For the first in this planned series I'm delighted that local birder Martin Pitt has provided a guide to The Vyne and Morgaston Woods. This is possibly the most important site (especially for waders) in the borough and a site that Martin knows better than anyone.

The Vyne and Morgaston Woods

The historic Vyne estate is based around the ancestral home of the Chute family approximately 3 miles north of Basingstoke. The estate actually extends to the edge of the Basingstoke and includes a mix of heath, farmland and woodland in addition to the ornamental parkland around the main house. The land is all in the ownership of the National Trust and the park and gardens are subject to an entry fee. To visit the areas highlighted here, it is not necessary to enter the grounds and open access is available year round. Please note that it is no longer possible to park in the NT car park and join the public footpath to view the lake without either being a NT member or paying the entrance fee and not before 10 am. 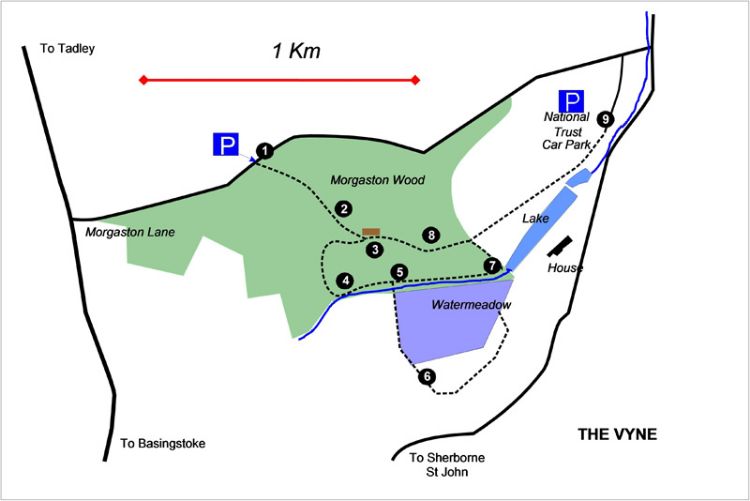 There is a small parking area on Morgaston Lane (1) and the tour of this mixed habitat immediately pitches into oak and chestnut woodland of Morgaston Wood. Tits and Nuthatches are common and a mixed flock can be chanced upon in winter. Following the main concrete track you pass an area of conifers (2) that attract coal tits and crossbills in irruption years, before arriving at the wood shed (3). This area is good for Siskin flocks, and in winter Brambling are regularly seen here.

Turning right and heading down the slope by open areas you arrive at the valley bottom (4). Around here and along the stream edge is favoured by Willow Tit. These are most easily found in winter and early spring. At (5) there is a part hidden track that crosses the stream and heads out across the water meadows. Once leaving the wood this is well defined along a barbed wire fence line and area of Willow Carr. Reed bunting are common and this also gives the first views over the watermeadow. 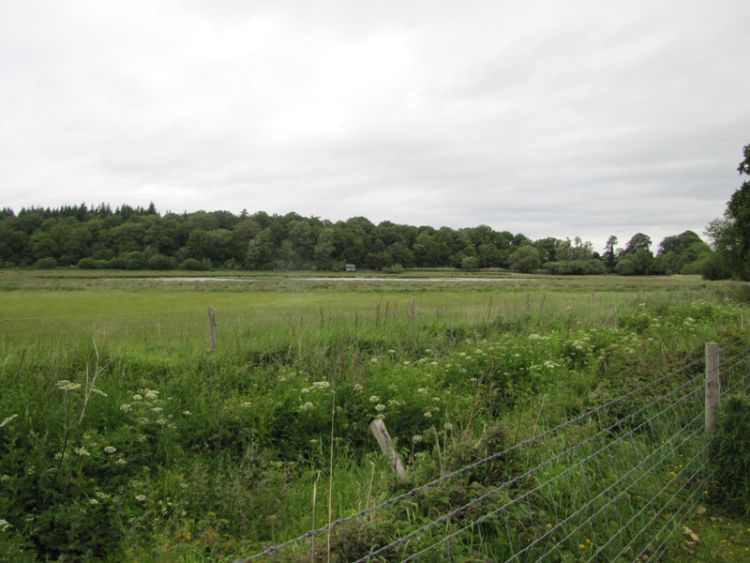 
The view over the meadow improves as the path heads across grazing fields and into parkland. With the sun behind you at (6) it is possible to view the whole of the watermeadows and its assembled ducks in winter, and waders in summer and on passage. Wigeon and Teal are the most numerous ducks, but Shelduck, Gadwall and Shoveler are regular. Breeding waders have included Redshank and Lapwing. At passage times these can be joined by Little Ringed Plover, Greenshank, Green Sandpiper, Ruff and Dunlin. Special mention must be made of Yellow Wagtail which occur in small numbers in spring and autumn and there is a possibility they can be attracted to stay and breed.

Returning to the main path, continue eastwards past the bird hide. This addition is only marred by looking directly into the sun, but will give a good second view over the watermeadow. Continuing on and heading towards the main house the Lake comes into view at (7). Here NT members and ticket holders can enter the grounds, which are now open 363 days a year, closing only on Christmas Eve and Christmas day. Tufted Duck and sometimes Pochard join the resident coot on the lake and occasional visitors have included Ruddy Duck, Goldeneye and Smew. Cormorant have moved into the area and a few birds are present throughout the winter. The lawns up to the main house are favoured grazing for the local flock of Canada Goose and these sometimes have with them Greylag Geese, Bar-headed Geese or Barnacle Geese from feral stock.

The path continues around the end of the wood by the grazing meadow. A path crosses this meadow to the main NT car park at (9). This route gives better views of the lake and the house. Returning towards the woodshed brings you past an area of regenerating scrub at (8). This area holds good numbers of Willow Warbler in spring, and can warrant a closer look for Spotted Flycatcher.